Welcome to Influence, Psychology and Persuasion

This is session number 022 of Influence Psychology and Persuasion. And this show is all about Behavioural Economics Principles. Well not all about, but certainly 3 tips to help you understand what this amazing study has to offer. 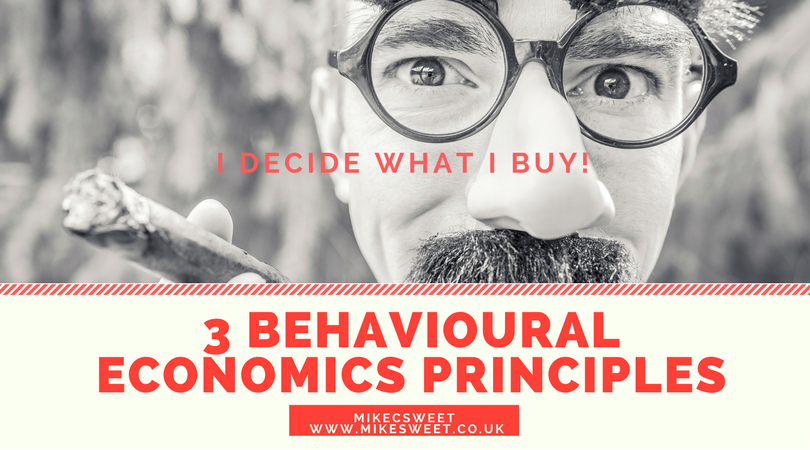 So, Behavioural economics are sets of psychological studies all around economic decision making. So, if you buy or sell things, this podcast and blog post is for you. And if you are involved in marketing, sales or run your own business, this is most definitely for you. Here’s a little more about behavioural economics background

As you’re listening/reading/watching this you will already have a clear understanding that we, humans, are anything but clear or easy to understand. We’re odd, we make irrational choices, decisions and statements all of the time.

I remember a few years back and my wife came home one Saturday in January. She walked through the door, beaming with pride, came into the living room where I was reading a book, hands at breaking point with carrier bags with red sale logos splattered all over and held them to my face. She then blurted out “You wouldn’t believe how much money I’ve saved“. Interesting, I thought. She would have bought anything if it wasn’t the January sales and the fact she had 25+% off. She felt like she’d saved money. Lol.

My wife isn’t the only reason for these studies. We all make irrational choices at times. Here are 3 studies to arm you going forward.

Now most of us get this. FREE is like a drug which pulls us in for a closer inspection. FREE has a magnetic pull that us mortals can’t resist. But is this logical?

Forget for a moment that nowadays we may have been abused by the power of FREE. Most of us now think, “but what do you what in return if not money?” We’re getting a little wiser!

The science shows we have an unreasonable connection to FREE!

Here is the interesting part though, when the researchers dropped the price by 1 cent, the vast majority then opted for Hershey Kiss. All because it made it FREE!
The word FREE makes us unreasonable. Watch out, or use it to your advantage.

We all know what we like right? We’re not persuaded by price, at all. We simply understand what’s good and what’s not!

If Only!
The research says we are more likely to admire a bottle of wine if it is priced considerably more. Interesting, this means we may perceive quality based on price.
Here are the bones of the study. The members of a Wine Club were invited in to taste and rate 5 bottles of wine, based purely on what they liked. Here’s the sneaky part, there were only 3 different wines. 2 Of the wines were in 2 bottles. Haha.
However, each bottle was only noted with a price label. Nothing else, just price. There were actually only 3 different wines in those bottles– two wines had two bottles each. Each bottle was marked only with the price tag and nothing else. The prices ranged from $5 to $45 for the same wines and the other ranged in between. So, the $5 wine was also marked at the top price of $45.
Was a clear correlation between the ratings of the wine and the price label? You guessed it. The $45 bottle of wine was rated the highest even though it was the same wine as the $5 bottle.

Here are 2 more examples of how price effects your decision making.

Prozac the antidepressant, was tested against a placebo. In this study, they sold the placebo at a price of $2.50 per pill and the real Prozac pill at $2.00.

Strange but true, the higher priced placebo outperformed Prozac.
Even more disturbing, students were given a caffeine and sugar drink and were told this would help them improve their alertness and cognitive abilities. But, half of the students were asked to pay full price for this while the other half received a huge discount… The results. The students who received a discount solved 30% fewer puzzles.
This study has been done time and time again in many studies and they all deliver the same results.

Simply talking about a particular attribute will cause people to make a decision based on how they are primed.

You can guess what happened by now for sure. Those who were browsing the aisles ended up buying those products they were asked about. They had been primed and then the seed was sowen and they ended up purchasing this items they had been asked about.

30 Days of NLP To Your Inbox

I hope you enjoy! Any questions, message me and I'll help.

5 Minutes a day will transform your understanding of NLP!